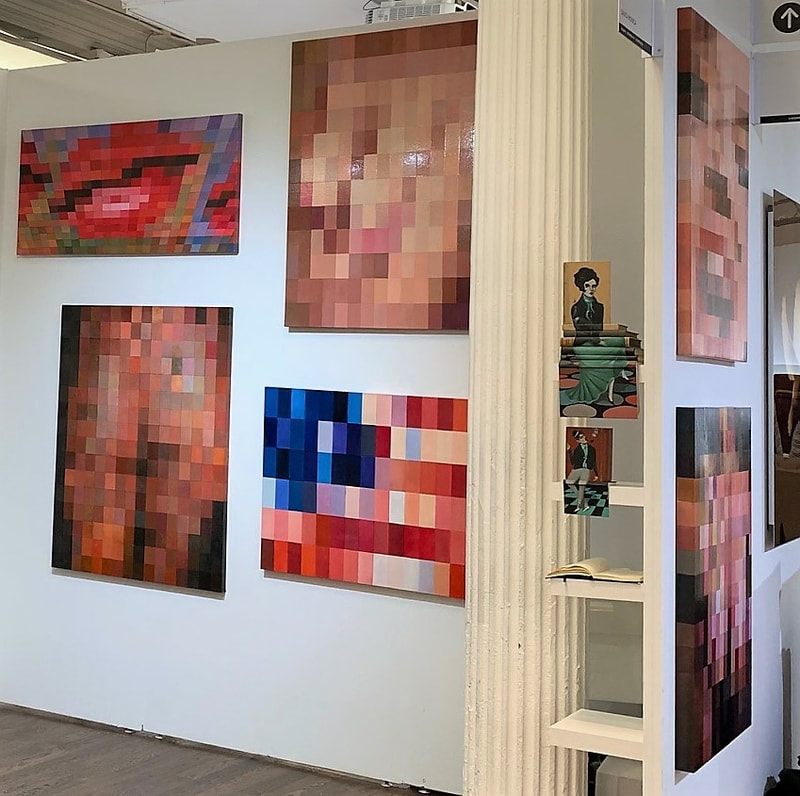 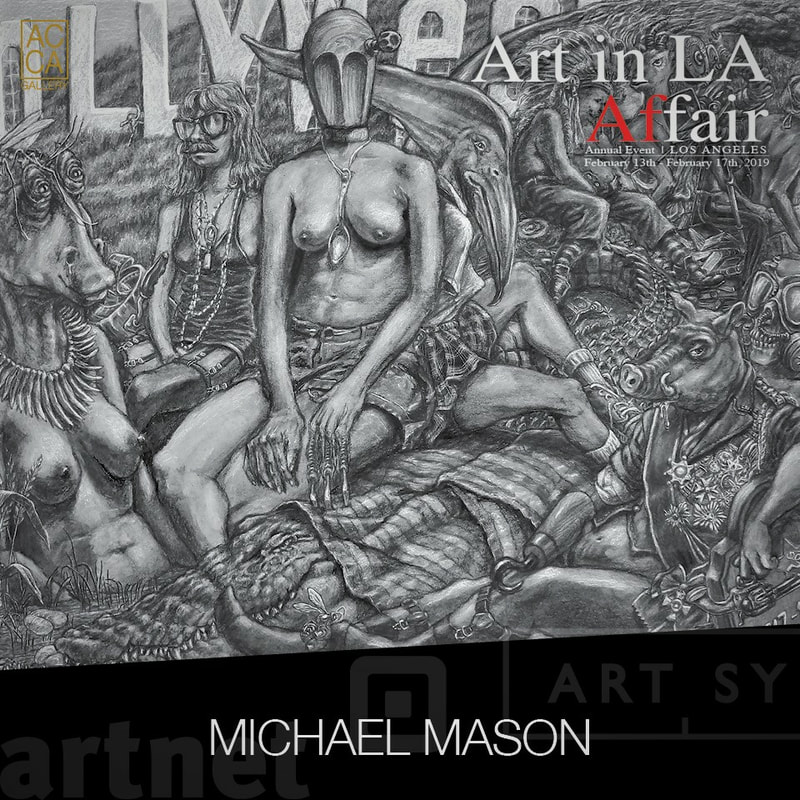 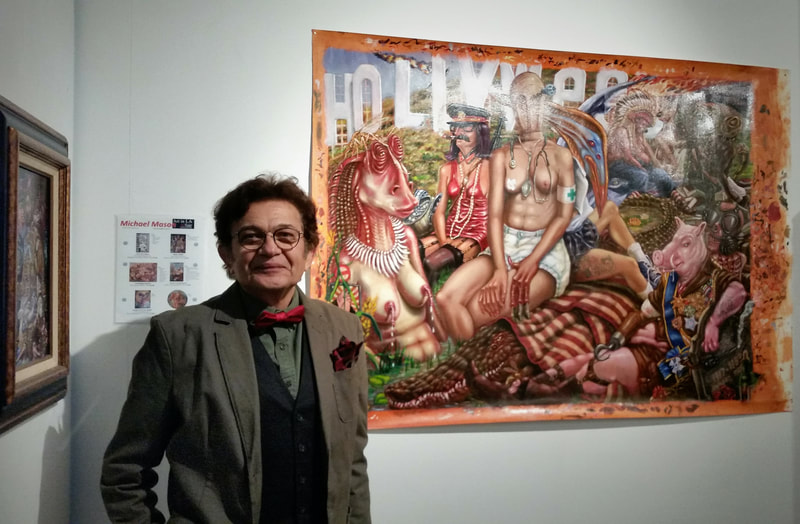 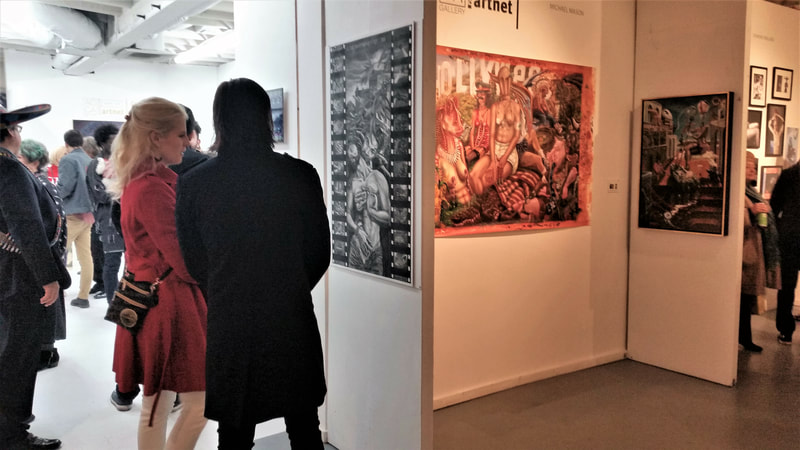 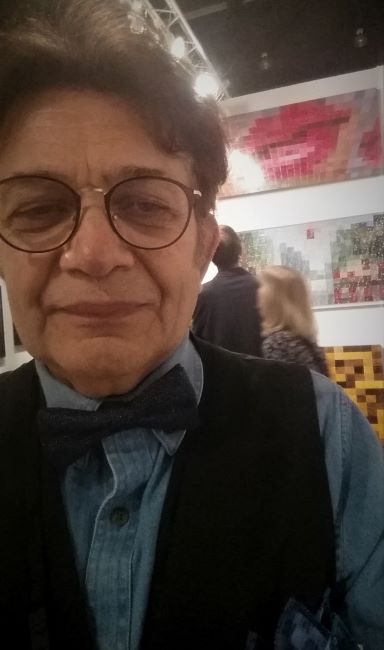 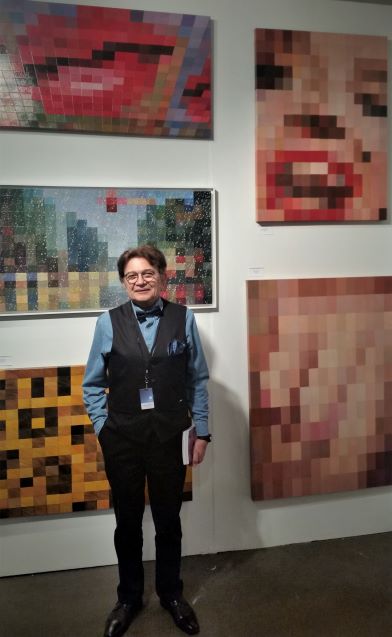 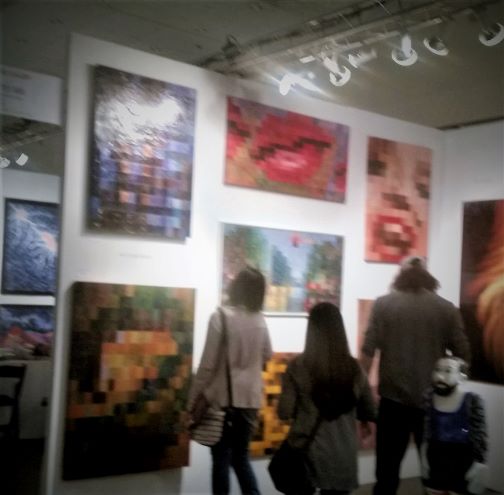 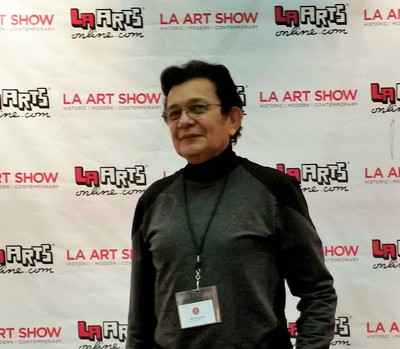 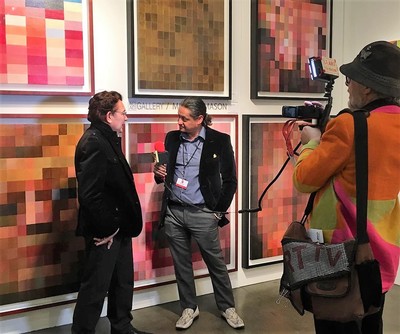 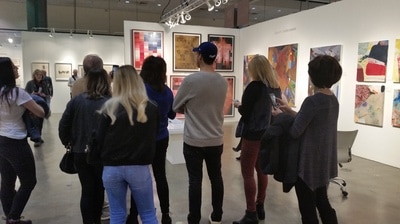 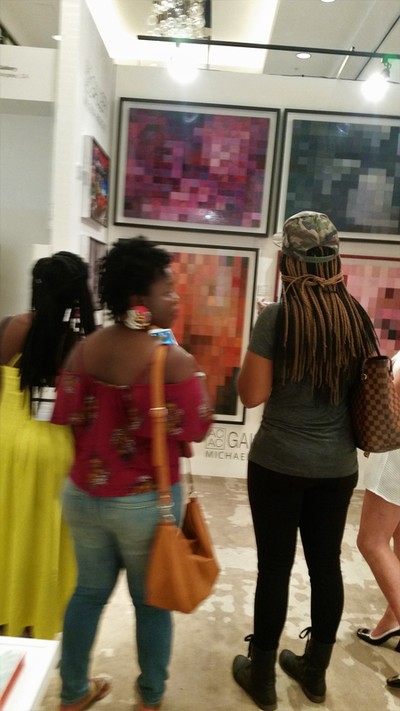 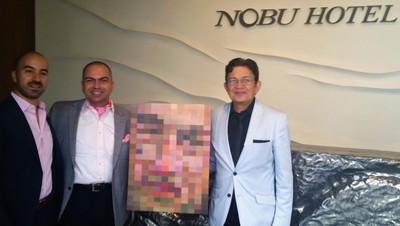 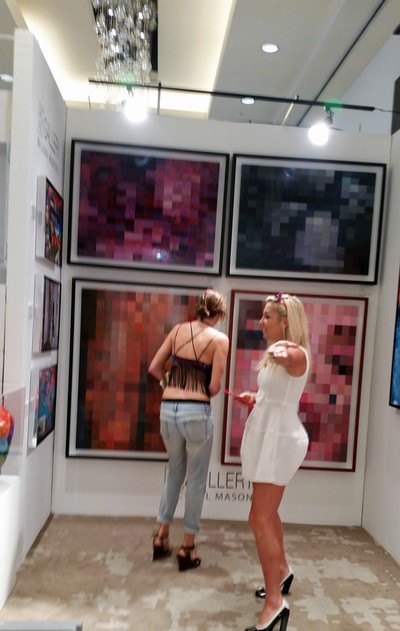 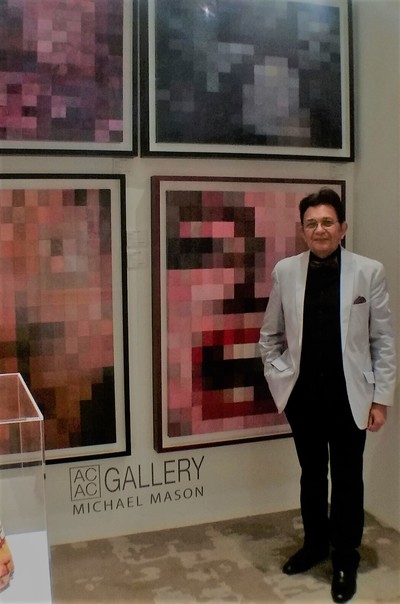 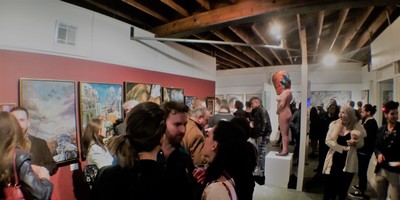 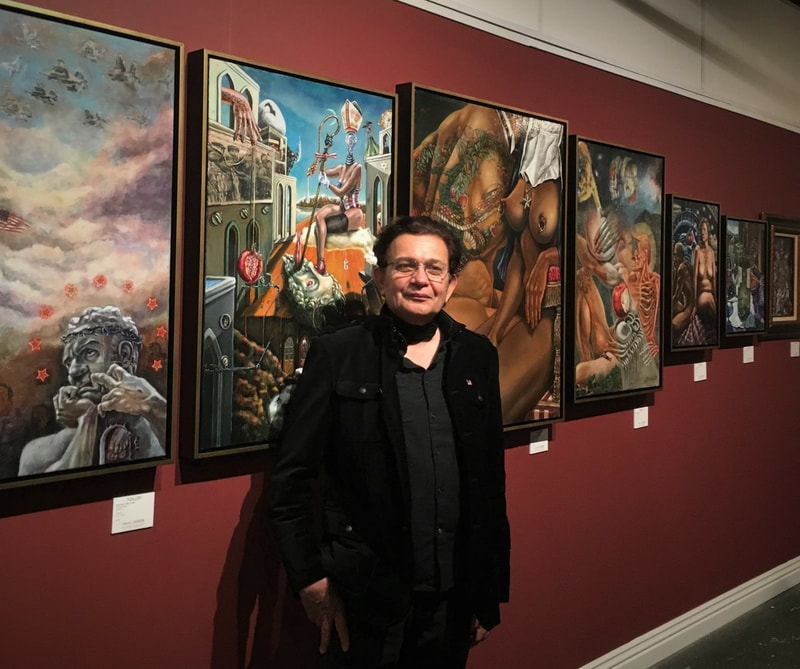 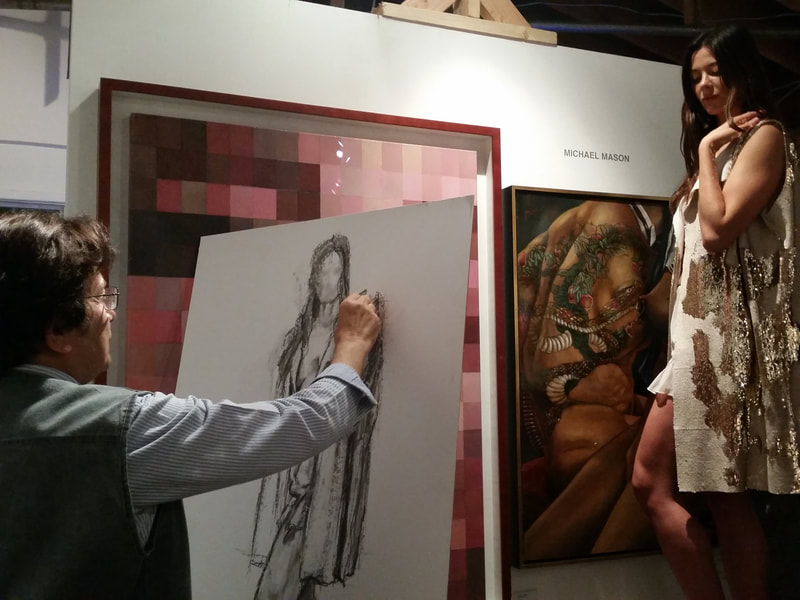 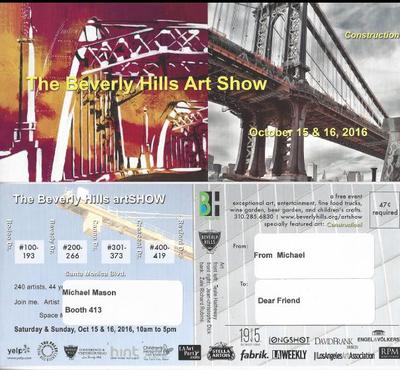 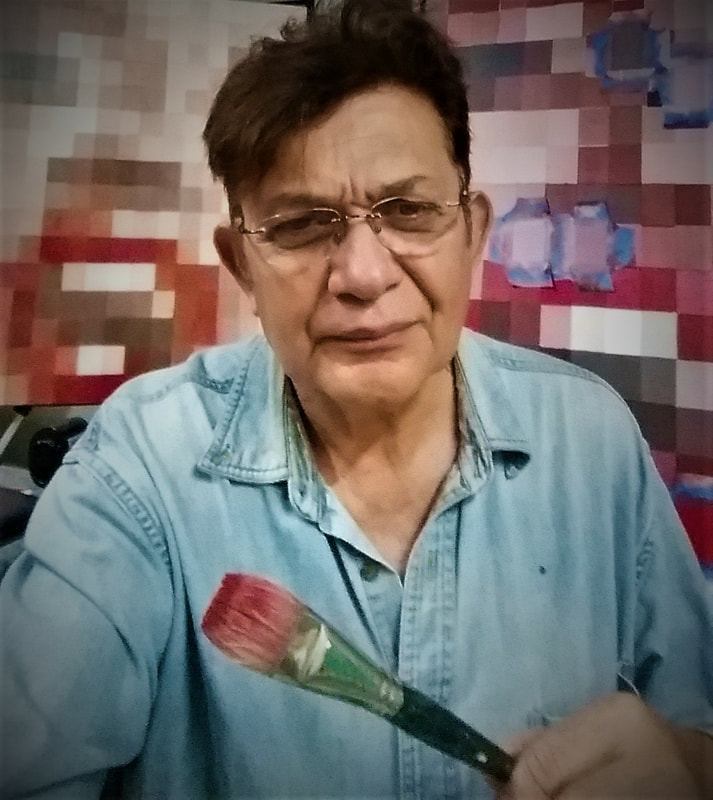 Michael Mason’s new series, Pixels, offers a deepened view into the artists own cultural diversity and ideologically rich practice. As the artist reflects on his accomplished past in the fields of engineering and philosophy, he approaches his latest work with modern technological influences and critiques of the omnipresent nature of all things, Americana. Constructing blurred imagery from seemingly insulated rectangular blocks of color, Michael’s recent paintings examine the nature of art-historical traditions via neo-impressionistic illusions and contemporary scientific production methods.
​The veiled characteristics of Michael’s new paintings causes a doubled viewing experience providing both abstract and objective imagery. Originating from the Mesopotamia region, Michael appropriates found images of western culture spanning from celebrity portraiture; to national landmarks; to American erotica, which he recreates as obscured pixilated paintings. This digital alteration of popularized iconography forces viewers to physically distance themselves from the work in order to gain a heightened sense of understanding and familiarity. Although seemingly playful, Michael looks to these moments as disconcerting metaphors for one’s inability to see total truths within people, the banality of daily experiences, and society’s digitally saturated ecosystems.
When dealing with ideas of obscured information, Michael often looks to historical influences such as Magritte and Dali whose works challenge viewers to reassess their familiarity with presented objects and scenery. Similarly, Michael looks to culturally saturated imagery and presents us with a sense of masked uncanny and unique technical executions. Depictions of famed American icons like JFK , Marylin Monroe are met with overtly exposed erogenous zones, celebrity close-ups, and commercial objects which all permeate through neatly formed geometric sanctions. The artist’s varied subject matter forces each work to be executed with a sense of This dismissal of visual hierarchies and ambiguous content selection once again breaks apart the visual discourses of each painting and instead portrays the pixel as a cultural unit of communication. One that is ever-changing, ever-present, and infinitely configurable, becoming ostensibly immaterial and inescapable.

Michael Mason is born-again in America.  Artist who paints, draws, uses printing making and collage to express stories from his previous life experience. His non-representational style is deliberate as he tries to dissect mythological and religions stories, fairy tales, movies…etc, and combines these ideas in a modern day context. Thus, forming a sometimes provocative picture which pokes fun at these long standing institutions and beliefs.
Michael was born in Mesopotamia, a land steeped with a rich historical background, all of which would later be suppressed by a visually limited regime. Americana imagery from comic books and movies provided relief and began to shape his young mind.  Sketching, watercolor and pastels helped him escape into his art world.
He spent six years in the army and describes this as ‘the worst time of his life’ and yet this too would provide influence in his work. Ultimately it has made Michael seek Freedom. The goal of which is to have freedom of thought.
Moving to the US has helped him realize his need to create art again. Studing Art in Los Angles has renewed his respect for the “old masters” and their influence is seen as he begins many artworks with the beacon of the human form and builds visual stories filled with deliberate symbols around them. He has shown his works at many exhibitions and Galleries and has won two People’s Choice Awards.
Michael Mason is constantly working at his craft and is slowly rising like the tower of Babylon to manifest himself and his art into the beautiful Garden of Eden.