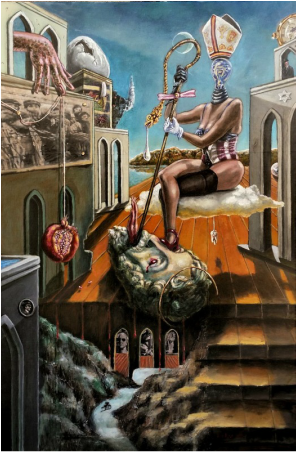 The idea of this painting takes the story of “Murder on the Orient Express” by Agatha Christie, in which a three-year-old child was kidnapped and killed by a man, despite collecting the ransom from her wealthy family. The murderer was caught, but fled the country after he was acquitted. But after many years, he was killed on the Orient Express train by 13 people from the family, seeking the justice that he had averted. Applying this idea to the genocide or holocaust, this illustrates the idea that in the case of a victim of genocide or holocaust, the criminals should be punished and justice take place. Therefore, I borrowed the title “Crime and Punishment” from Dostoevsky's novel.
One can identify genocide or holocaust as surreal nightmare moments against humanity; and the surrealists referenced Freud’s theory of psychosexualism in which he divided the human psyche into: conscious, unconscious and preconscious. The painting is also divided in three equal parts: Heaven, life and hell. Every part filled out its erotic symbols in order to disguise the repressed or “latent” content in interplay of words and images in terms of condensation, displacement and distortion according to the mythologies, religions and sciences from human history.
​